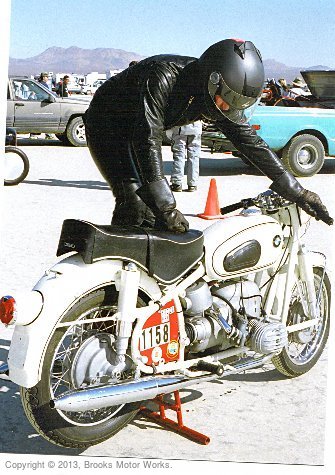 Thanks to our sponsers: Tenzing Momo of Pikes’s Place Market, South Sound BMW, Local Union No. 1797 of the United Brotherhood of Carpenters and Joiners of America,and Brian, Dean and Wes, Scott, Bruce and all who donated time, money, materials and imagination and participated in this adventure….

We’re back from our Bonneville adventure. Over the next couple of weeks I strip the motor and examine everything. A set of lifters gets magnafluxed and installed, the valves and guides replaced, and I address a couple of other modifications which I had been considering. Overall I am very happy with the way the motor looks inside. A slightly lower rear drive unit is prepared and installed, and now we should be faster and stronger than ever. Early November and we pack the bike and some spares and head for the last meet of the year: El Mirage dry lake bed in Southern California. We stop in San Francisco and picked up Brent who has decided to run his R69S. I’ll be riding Bonita Rapida with my new/used leathers.

The van is loaded, ready to leave Olympia

On the starting line

I am very confident based on earlier road tests that with our lower gearing, and especially at this lower altitude, that this is something we can do. The motor feels very solid and strong as I launch the bike. I short shift at about 7500 rpm in the first two gears to get the feel of the surface.

Once over 70 mph the traction on the ultra fine silt of the lakebeds surface feels (perhaps deceptively) almost like asphalt, but the rear feels hooked up so I run her out to 8500 rpm in third.

I’m now at 94-96 mph with 500 rpm and another quarter turn of the throttle in reserve. The feeling is one almost of floating as my wheels race over the lakebed. The motor is incredibly smooth at these speeds and the irregularities of the lake surface completely imperceptible.

I try a shift to fourth so see how well she’ll pull the taller gear, but the jump is so great that she comes almost completely off the cam. The acceleration is there, but without any real punch or authority, and the lakebed is short, only three miles, so I return to third and cruise the rest of the course at about 8,000 rpm to get a good plug check and save the motor for the runs which will count.

Away from the starting line As I pull off the course I am very happy with the run. I know that we have the 100+ mph potential we were looking for; and if I run it up further in the lower gears to get speed up faster I’ll have more time to nudge her into the powerband once I’m in fourth.

And I have two MORE options: do the entire run in third gear and bump the record to 102+; or go to the taller rear drive ratio we had run at Bonneville and see how high she will spin that ratio down here at the lower elevation.

The power is definitely there; much more than in the rare air of 4400 foot Bonneville (El Mirage is approx 2300 feet high), and I still have another set of heads which I have been experimenting with in an attempt to increase the flow of the good air IN and the bad air OUT. It would all depend on how many more runs we would be able to make. But we never run again. Saturday afternoon an accident closes all lanes for about an hour and a half.

The expected attendance was 70-80 entries, but over 130 showed up, so the lines were very long. And the SCTA makes the decision that all attendees should be given the opportunity to make at least one pass on Saturday, so we are bumped into a ‘B’ group until everyone who was signed in had raced. That decision is only fair, so I have no complaints, only impatience, as the day wears on, knowing that we had it in our grasp if only we could get to the course and make our pass!

Which did not happen that day, nor on Sunday either as the wind started to blow in short violent gusts raising the silt from the lakebed, which is so fine that it takes seemingly forever for it to fall back out of the air. By which time there are more gusts, then a steady wind by 9:30, then at 10:00 the visibility is down to under 100 yards, and at 10:30 on Sunday morning the SCTA cancelled the rest of the meet. So we make no run on Sunday.

Winds blow up a dust storm We pack it up and head for home. Frustrated, but also encouraged and excited. In May of 2008 we will be back at El Mirage, in August we will be at Bonneville. Perhaps with two or more machines this time, each contesting a different class. Care to join us? As a sponsor, as a volunteer, or as a competitor, we would love to see you there!

I would like to thank our crew : Brent and Sue Hanson, Todd and Annemarie Rasmussen, Uncle Phred, Dean Paulus, Wes and the Inlaw Racing Team, and Brian for the use of his truck at Bonneville. Sincere thanks also go out to our generous sponsors: Don at Olympia Powder Coating, Local Union No. 1797, The United Brotherhood of Carpenters and Joiners, Larry at Mega Machine, and South Sound BMW In Fife (www.southsoundbmw.com).