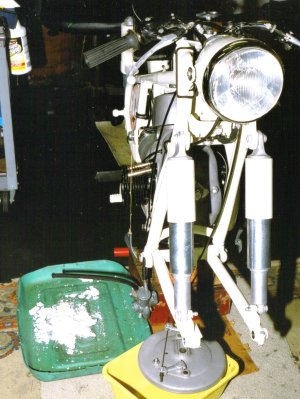 Going to Bonneville Salt Flats in 2007

First, thanks to our sponsers: Local Union No. 1797 of the United Brotherhood of Carpenters and Joiners of America, Tenzing Momo of Pikes’s Place Market, South Sound BMW, and Brian, Dean and Wes….

Well, Anthony Hopkins is a great actor. And after seeing The World’s Fastest Indian, Kevin has hatched a plan…

Originally, he planned on going this year as an observer to Bonneville Salt Flats with Barb, Bruce, Kathy, Bob and Sue, Ralph and Elaine, Dean, Brent and Richard (and maybe Darryl and June).  We were going to check out the Southern California Timing Association (SCTA) in action.

Well, now his goal is to skip the preliminary recognizance trip, and modify a race bike to take down this year, and possible a sidecar race rig as well.  The Flying Fox racing team will support him as he builds the bike to attempt the speed record for a 500cc BMW twin pushrod production bike.

This project will take a lot of experimentation, trial and error and testing. He’ll modify the cylinder head, carburetion, crankshaft, flywheel, clutch and pistons.  He already has a hot 344 racing cam for the R50 BMW.  The goal is to exceed the SCTA record- maybe go 120 to 125 mph, Brent piloting.

The race bike has a name.  Bonita Rapida, meaning, of course, Pretty Fast.  So far, we have built the chassis.  The chassis and sheet metal are all painted Dover white.  The motor is coming together.  Wheels are all built.  The rest of the drive line is built, as well as a spare transmission in case we blow one up; and, we have 2 rear drive units of different ratios, since gearing will be critical for the record attempt.  Team members Dean and Doug (a.k.a. the umbrella girls) have fabricated a roller race starter and a track stand.  Now we have all the professional looking acoutrements to go and hopefully not embarass ourselves too much.  Magnificent Sue has committed to a sincere attempt to be one of the Pit Tootsies, which is laudable- after all, heroic Brent is the scheduled pilot of our race vehicle.  We also have a test mule vehicle with all of the mechanical features of the race bike, in a 600cc format, and that is undergoing current street testing, showing grand success and great promise.

Local Union No. 1797 of the United Brotherhood of Carpenters and Joiners of America has generously contributed to our competative race efforts.  Thank you, guys and gals, we sincerely appreciate your generosity of spirit, and your recognition of and participation in such a spirited adventure!!  You’ll ride along with us as we blast accross the salt flats…..

We want to thank Brian again for the generous loan of his great truck. He didn’t come along in body, but let us drive off in his shiney, spectacular truck, which was definitely a very trusting thing to do. And that wonderful gesture allowed us to get safely there and back. Thank you, Brian!

They still need to do it again tommorow in order to solidify their breaking the record and to get the run in the books. Flying Fox racing team then has to decide about hanging around to protect their record, or gamble and head home.  I’m betting that they’ll hang around and enjoy the sporting event.

So they headed out again, and about a mile in, they busted something. So they headed home, excited and already planning another adventure. We had a party to celebrate at the house on Sunday, and there was much talk about Southern California El Mirage racing, and Bonneville next year…..

Now with our new and improved race bike, we are headed to El Mirage in November. That means Kevin, Dean, Sue, Brent, Uncle Fred, Wes, Warren, and some VME members.

Barbara is not liking how tempermental Kevin is- he is dieting to squish into his too-tight leathers, because he wants to give Bonita a spin himself. But, she sure likes how he looks in those same leathers…